By using arithmetic + learning to dance

A Facebook friend took one look at the picture of one of the pages from Petkov Stainov’s Thracian Dances that is posted on the East Metro Symphony Orchestra’s Facebook page, saw the meter of the music and exclaimed, “5/16!” 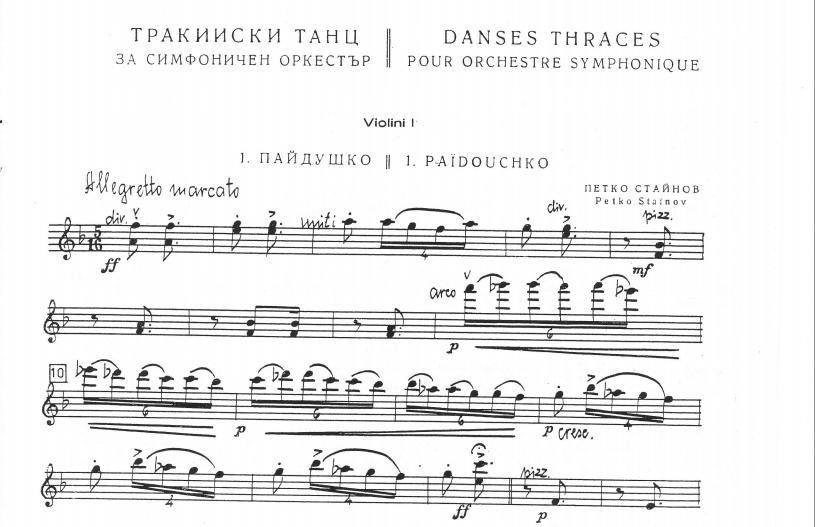 When we learn how to play printed music in the U.S. – most of us as children – it is explained that every piece of music has a meter, which looks like two numbers stacked one upon the other (similar to how we write fractions, but with no line separating the numbers).The top number, we are told, tells us how many beats appear in each measure,the bottom number what kind of note gets one beat. (If a quarter note gets one beat, the bottom number of the meter is “4.” If an eighth note gets one beat,the bottom number of the meter is “8.”) And that is that! Marches are typically in 4/4 meter, and each measure contains four equal beats. A waltz is typically in 3/4 meter, and each measure contains three equal beats: ONE-two-three (etc.) Beats within a measure are always, always, always equal in length. Period. The end.

Fast forward to (can it already be?) nine years ago,when I received an introductory phone call from Minnesota-based, Bulgarian cellist Nickolai Kolarov (who I suspect was making cold calls to all the orchestra conductors listed on the Schubert Club’s Twin Cities Classical Music Organizations Directory). Soon I was receiving an introduction to the world of classical Bulgarian music (which of necessity includes an introduction to the world of Bulgarian folk dance and music). I was completely flabbergasted to see printed music with meters like 5/16, 7/8 and 11/16, but my guides in this musical introduction (which ultimately included three twin cities-based Bulgarian musicians, named Nickolai, Nikolay, and Nikola) explained that these meters were simply composed of the “long” and “short” beats that are in Bulgarian folk dances. Folk dancers and folk musicians do not work from printed music, they simply learn the combinations of “long” and “short” beats that form the step patterns for each dance. But once the music began to be notated for printed consumption, the only way these beats could be written in musical language was by notating “short” beats as some sort of duple rhythm (quarter note, eighth note or sixteenth note) and “long” beats as some sort of comparable triple rhythm (dotted quarter note, dotted eighth note or sixteenth note). Thus if a quarter note is used to notate the “short” beats of a dance, a dotted-quarter note is used to notate the corresponding “long” beats. If the basic combination of steps in this dance is 2 short beats + 1 long beat, add it all up and your meter is 7/8!

The Ruchenitsa is a very popular Bulgarian folk dance whose 7/8 meter is composed of the 2 “short” + 1 “long” beat described above. There will be several examples of Ruchenitsa in our program on June 2. 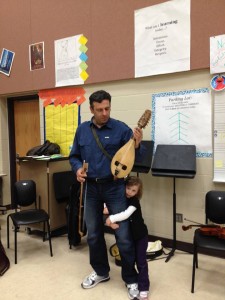 I cannot overstate how revolutionary and disorienting this notion of building a measure of music with fundamental beats of different lengths can be to a typical, western, classical musician. (Picture a march or waltz with one of the regular beats slightly longer than the rest and you get the idea.) Therefore as I contemplated bringing some of this music to my orchestra I decided that the best way for us non-Bulgarians to approach Bulgarian rhythms and meters would be first to learn how to dance them! We would learn to dance some of those folk dance steps before even looking at their written representations in printed music.

Thus EMSO’s first rehearsal in preparation for our upcoming Bulgarian concert began with an introduction to some basic Bulgarian folk dance steps we would find in our orchestra music, led by Ethnic Dance Theatre’s artistic director Donald LaCourse and our gadulka master Nikolay Gueorguiev (accompanied by his young daughter Marina). Next we sat back down and practiced clapping and then playing with our own instruments some of the Bulgarian rhythms and meters. It wasn’t until our second rehearsal that we turned to the printed music, and we’ve kept referring back to our dance experience and our rhythm exercises as we’ve progressed through our preparation period (in this case 7 weekly rehearsals). I trust we will have all these new rhythms digested by the time we perform.