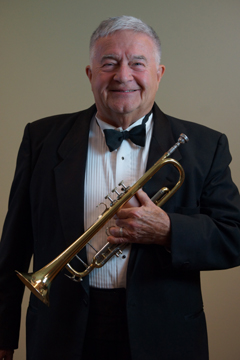 I joined the 3M Symphony Orchestra in early 1967, along with my wife Karen, when I joined 3M and we were the trumpet section along with several others until we moved with 3M to Brookings SD in 1975. When we first joined the 3M Orchestra, it was only one of two amateur Symphony Orchestras in the Twin Cities – now there are over 20. It’s great to play in a good orchestra where we can play a variety of classical and pops music over time. We returned to St. Paul and 3M Orchestra in 1990.

Over the years four of our children have joined the orchestra playing violin (Erin) and trombone (Kevin) and singing in several chorus pieces, and our daughter, Erin, sang a Mozart Solo several years ago with us.

Karen and I have really enjoyed retirement where we can indulge in our musical interests to our heart’s content. After retiring in 2001 I got very active in community and volunteer activities for many years (I received the 3M Retiree Volunteer of the Year award in 2009),  and I now play in EMSO, sub on Trumpet and Fluegelhorn in a German Band, play cornet in the Northwinds English Brass Band, and the U of M Alumni Band, along with several other small ensembles. Karen and I also sing in Barbershop Choruses and Karen arranges folk songs for Barbershop Quartets. We are also trying to travel as much as we can , and we enjoy many other activities with family members such as reading, genealogy, and golf.