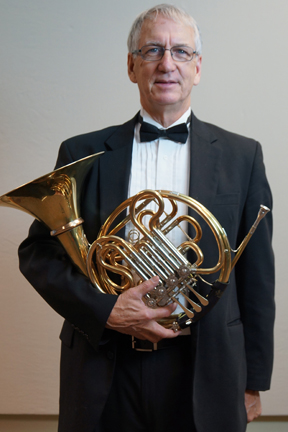 John grew up in Pennsylvania. Currently, he lives in Lindstrom, a beautiful city north of Stillwater. John’s hobbies include a strong appreciation for music, listening to it, and playing it (obviously).

John is employed as a lead software engineer. He received his Bachelor of Music degree at Manhattan School of Music, and has played the horn since the age of 10. He won a concerto competition at Manhattan with his future wife (Karen, an accomplished oboist), playing Mozart’s Symphonia Concertante. John has played with various groups in the Twin Cities, and is the first hornist for Exultate, a Lutheran chamber orchestra and chorus. The horn teachers most influential to John were Clarence Mayer of the Philadelphia Orchestra, and Martin Smith of the St. Paul Chamber Orchestra and New York Philharmonic. John can occasionally be heard playing for services at Westminster Presbyterian Church.

He enjoys music, geneology, and farming.  Currently he plays a Paxman descant and GeyerWrap French horn.