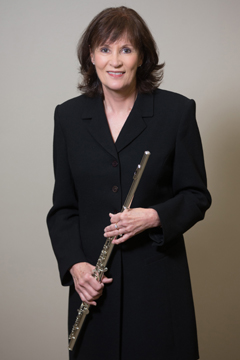 In 2015 she became a full time EMSO member

Patty began playing the flute in 5th grade, because her mom suggested the flute sounds “like a bird.” Despite the fact it took a month to master the mouthpiece alone, she has never been sorry for her mother’s early guidance, as she simply loves it. She enjoyed 8 years of private lessons, but then had to limit her musical endeavors in order to attend the medical school at the University of Minnesota and then for her career practicing emergency medicine.

Fortunately semi-retirement 10 years ago gave her more time to devote to music, first joining the South of the River Band in Eagan. But always desiring to play with an orchestra, she began substituting for EMSO in 2000, playing the flute and piccolo. In 2015 she became a full time EMSO member and loves the challenging music and the opportunity to play with this great organization of talented musicians.