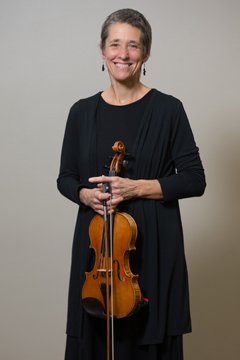 Woodbury, MN, August 23, 2017 – The East Metro Symphony Orchestra (EMSO) is pleased to announce violinist Joan Molloy as it’s concertmaster. Molloy served as guest concertmaster for A Celebration of Finnish Music, the final concert in the orchestra’s 2016-2017 concert season, and returns as a permanent replacement for Michal Sobieski, EMSO’s previous concertmaster, who retired last year. “I am happy to have been invited to work with EMSO and am looking forward to an exciting year together,” Molloy says.

In addition to EMSO, Molloy is founder, director, and teacher of HeartStrings Studio, located in River Falls, WI. Molloy is also a member of the Cavatina String Quartet and Ensemble Con Brio. Her past orchestral experiences include assistant principal violinist in the Duluth Symphony Orchestra; concertmaster and soloist with the Eau Claire Chamber Orchestra; and concertmaster for the Chippewa Valley Symphony, where she made substantial contributions to the orchestra. “I worked closely with the [Chippewa Valley Symphony] board, the conductor, and the administration to bring positive change and growth,” says Molloy. “I love being part of a group in which I feel I can contribute in this way, and I am hoping to explore such possibilities with EMSO.”

EMSO Music Director and Conductor, Elizabeth Prielozny Barnes, says EMSO is thrilled to have Molloy as its new concertmaster. “Her great performing and coaching skills…combined with her powerful work ethic and heartfelt connection to each musician she works with [makes] her a great choice to join EMSO’s artistic leadership team.”

Molloy will begin her tenure as EMSO’s concertmaster with the first concert of the upcoming season, A Mighty Fortress, which will present Mendelssohn’s Reformation Symphony at King of Kings Lutheran Church in Woodbury on October 29th.

For more info on Joan Molloy and EMSO, visit the EMSO Concertmaster webpage

More In Tune with EMSO Articles